A new scientific paper published in the European Journal of Human Genetics has confirmed that the number of people worldwide living with a rare disease is estimated at 300 million. This paper is co-authored by Orphanet (coordinated by INSERM, the French National Institute of Health and Medical Research), EURORDIS – Rare Diseases Europe and Orphanet Ireland.

This is the first time that a robust analysis of the global prevalence of rare diseases has been conducted using the publicly available epidemiological data in the Orphanet (www.orpha.net) database.

According to the research conducted, rare diseases currently affect at any point in time 3.5% – 5.9% of the worldwide population, equivalent to a conservative estimate of 300 million people worldwide (4% of an estimated world population of 7.5 billion), the number used until now by Rare Diseases International and EURORDIS. The analysis shows that there are over 6,000 clinically defined rare diseases, of which 72% are genetic, and of those 70% start in childhood.

Yann Le Cam, co-author of the paper, member of the Council of Rare Diseases International and Chief Executive Officer of EURORDIS commented,

“Collectively rare diseases are not rare. The findings published in this paper support years of efforts from the rare disease community to advocate for the prioritisation of rare diseases as a public health priority that affects millions of people around the world, not just the few. No one can deny the significance of the global rare disease population anymore, a critical mass of people who have been the health orphans so far, with acute needs for better healthcare, access to innovative treatments and a social system that supports their right to reach their highest potential of well-being”.

Read the press release for this paper 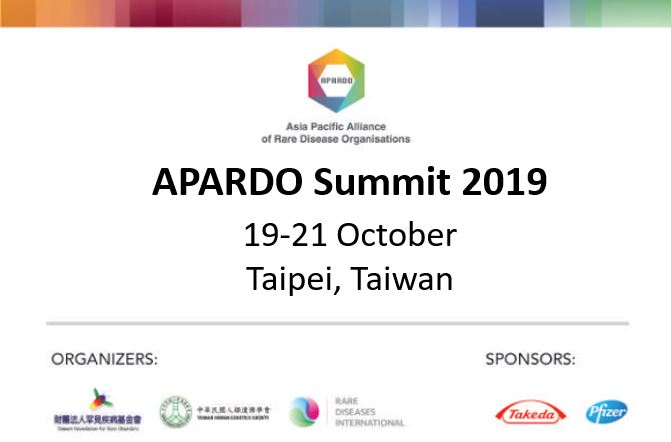 Join us at the APARDO Summit 2019: Regional Collaborations for Global Change

This session is organized jointly by APARDO, Taiwan Foundation for Rare Disorders and Rare Diseases International, followed by an internal meeting of APARDO members.

This session is organized jointly by Taiwan Foundation for Rare Disorders and Taiwan Human Genetics Society.

The event is free, but a separate registration is required.

This session is hosted by the Ministry of Health and Welfare and Ministry of Foreign Affairs Taiwan.