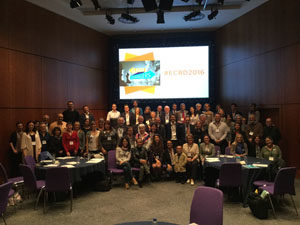 RDI’s Annual Meeting was held on May 25th, 2016 – the day before and in the same premises as the European Conference on Rare Diseases & Orphan Products (ECRD 2016) in Edinburgh, Scotland.

At only the second annual RDI meeting following the launch meeting in May 2015, over 80 participants focused on: progress in RDI activity made so far; how to advocate for rare diseases to become an international public health priority; how international rare disease stakeholders can join forces to do this and also next steps and strategic priorities for RDI.

The event was also an opportunity for RDI members and those patient groups potentially interested in joining, to meet and discuss the advocacy agenda of the global alliance.

At the meeting, the new members of the Council introduced themselves and the actions planned. Yann Le Cam, Chief Executive Officer of EURORDIS and member of the recently elected RDI Council, presented a draft action plan for the next 3 years, which is open for consultation via the RareConnect RDI Discussion Group.

Durhane Wong-Rieger, President of the Canadian Organization for Rare Disorders and member of the RDI Council, opened the meeting by saying: “There has been great improvement over the last two decades, now when you mention rare diseases people know what you are talking about. Now our role is to ensure rare diseases are explicitly recognised as part of universal health coverage. RDI will create tremendous opportunities in the near future. Right now we all need to work together; we need to take a leap of faith to make RDI a success, to bring together the global rare disease community and to ensure rare diseases are recognised as a public health priority.”

Anders Olauson, Founder and Chairman of the AGRENSKA Foundation, also introduced the new NGO Committee for Rare Diseases, in which RDI will represent people living with a rare disease. The inaugural meeting for this Committee, which was established under the umbrella of the Conference of NGOs with Consultative Status to the United Nations Economic and Social Council (CoNGO), will take place in November 2016.